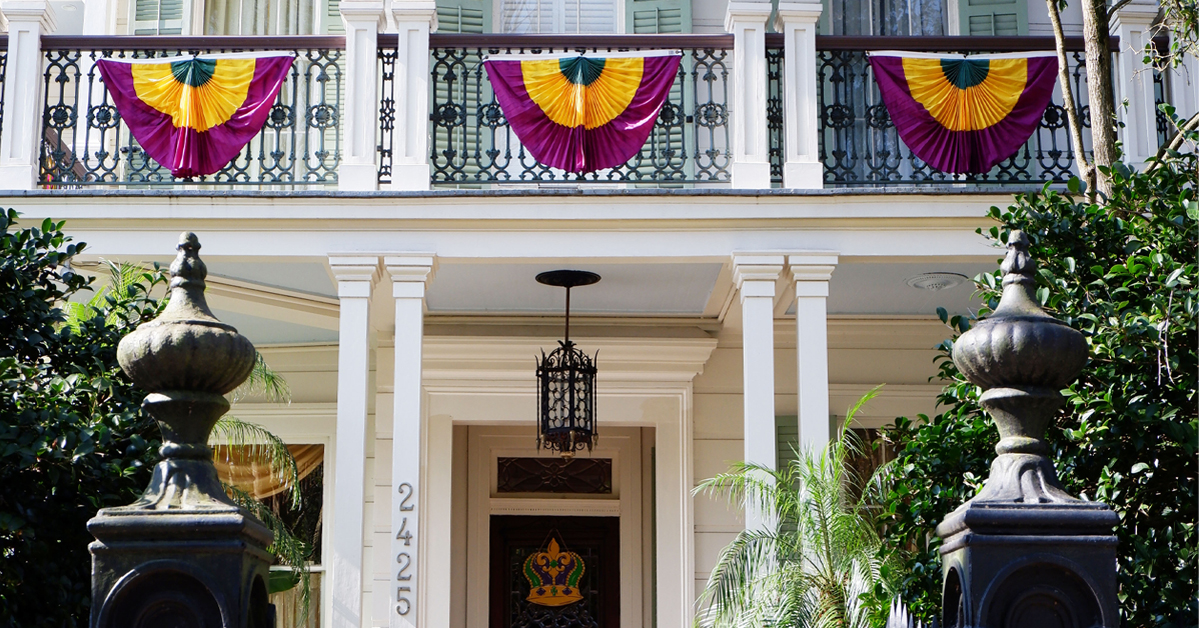 *This post may contain affiliate links to products, which mean I may receive a commission, at no cost to you, if you make a purchase through these links. As an Amazon Associate, I earn from qualifying purchases. Please see my Disclaimer.
Share
Pin30
Tweet
WhatsApp
Reddit
Share
Email
More
30 Shares

I recently visited New Orleans, or “Nawlins”, for the first time to celebrate Mardi Gras. While I was there, I took a guided walking tour of the Garden District, which is one of New Orleans’ most popular and historic neighborhoods.

The Garden District features an array of nineteenth century Victorian style, shotgun homes that line the streets.  Take the walking tour and find the homes of Hollywood’s A-List! Currently, Sandra Bullock and John Goodman reside in this area. Nicolas Cage and Brad Pitt and Angelina Jolie, when they were still married, previously owned homes in the Garden District too!

If you continue to walk the Garden District, you will also find some famous movie set homes! Have you seen the 2008 Blockbuster “The Curious Case of Benjamin Button”? The home of Benjamin Button used in the film can be found on Coliseum Street!

A Look in the Garden District:

Since 2005, the current resident of the home is the actor John Goodman. Located on Coliseum Street, the Garden District Mansion was originally built in 1850 for lawyer Joseph Merrick Jones.

The Carroll-Crawford house was completed in 1869 by bricklayer Samuel Jamison who was determined to build houses on his own. The interior designs of the home capture Jamisons’ signature plaster work. This three-story Italianate house was built for Virginia cotton merchant, Joseph Carroll.

It is also noted that American writer, Mark Twain, often attended the huge parties the original owner Joseph Carroll would throw inside.

The Mayfair Manor house was built in 1857 by merchant Albert Hamilton Brevard.

This pink home was bricklayer Samuel Jamison’s second home project completed in 1869. Locals also claim that this home is haunted and ghosts are drawn to the home. Spooky.

Since 1982, this has been the home of former New Orleans Saints NFL Quarterback, Archie Manning. Yes, the parents of Eli & Peyton Manning, also Pro NFL players.

9. Toby’s Corner at First and Prytania

This home is believed to be the Garden District’s oldest house! The home was built in 1838 for Thomas Toby, a businessman from Philadelphia. The architecture style reflects that of the West Indies plantation homes that were built in New Orleans around this time.

The mansion was built in 1872 for Bradish Johnson, who had obtained his wealth from his family’s sugar cane plantations.  This home is a Reconstruction-era architecture.

This Garden District home has been occupied by the French since the mid 1950s.

12. Our Mother of Perpetual Help Chapel

This home was built in the mid-1800s by merchant Henry Lonsdale and is deemed one of New Orleans most iconic homes. The home is a Greek Revival-style mansion. In 1925, the Redemptorist Fathers bought the home and turned it into a Catholic Chapel.

From 2005 to 2009, Hollywood actor Nicolas Cage occupied the home. Unfortunately, in 2009, Cage lost the home to a foreclosure. The property is
currently part of the Saint George Episcopal School in New Orleans.

One of New Orleans homes with the Italianate Architectures style. Built in 1853 by English cotton merchant, Thomas Gilmour.

The Briggs-Staub house is a Gothic Cottage built in 1849.

Built in 1832. In the movie, the Curious Case of Benjamin Button, starring Brad Pitt, this served as the main house in the 2008 film.

Creole-style from 1878. This is also currently the home of Sandra Bullock since 2009!

Wealthy Virginia banker, Walter Robinson, built this mansion from 1857-1867. Robinson obtained his wealth selling tobacco and cotton. The interior of the home feature 15 foot high ceilings as well as indoor plumbing, making this is one of the first homes in New Orleans to have both.

The Garden District was originally largely American, and in 1850, Michael Musson, a wealthy tobacco grower, was one of the first Creoles to build a mansion here.

All photos are mine and were taken by me. 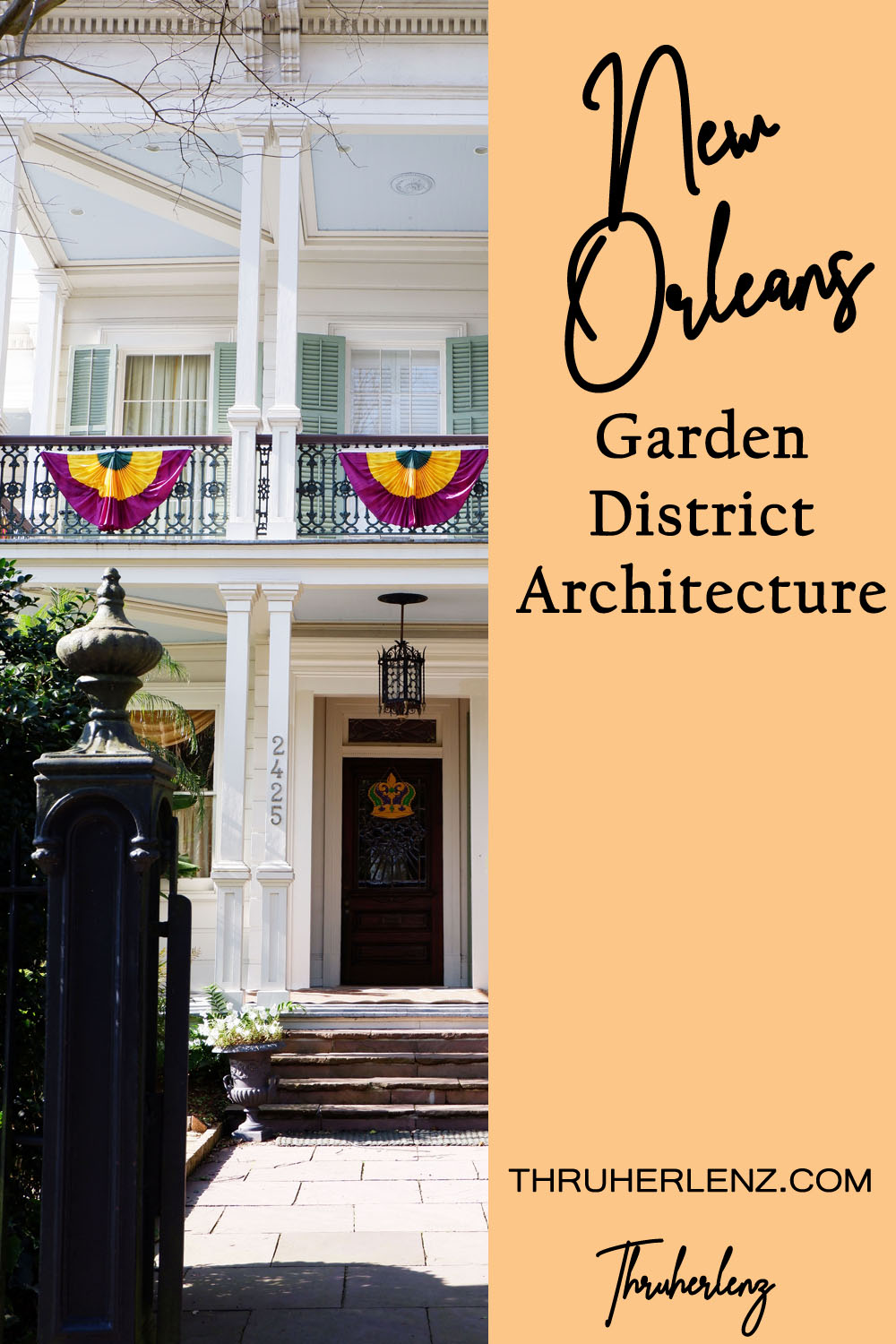 10 Must Pack Items Every Woman Needs to Bring to Egypt 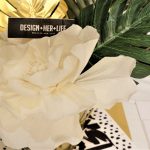 My Experience Attending a Women’s Only International Retreat

Another Historic Black Town You Might Not Know: Mound Bayou

Photos to Inspire You to Travel to Egypt This Year!

Excellent web site you have here.. It’s difficult to find high-quality writing like yours these days. I seriously appreciate individuals like you! Take care!!

I’m very happy to discover this page. I need to to thank
you for ones time just for this fantastic read!

I definitely really liked every little bit oof it and I have you bookmarked to check out neew things in your
blog.

Thank you so much for the great article, it was fluent and to the point. Cheers.

This website uses cookies to improve your experience while you navigate through the website. Out of these, the cookies that are categorized as necessary are stored on your browser as they are essential for the working of basic functionalities of the website. We also use third-party cookies that help us analyze and understand how you use this website. These cookies will be stored in your browser only with your consent. You also have the option to opt-out of these cookies. But opting out of some of these cookies may affect your browsing experience.
Necessary Always Enabled
Necessary cookies are absolutely essential for the website to function properly. These cookies ensure basic functionalities and security features of the website, anonymously.
Functional
Functional cookies help to perform certain functionalities like sharing the content of the website on social media platforms, collect feedbacks, and other third-party features.
Performance
Performance cookies are used to understand and analyze the key performance indexes of the website which helps in delivering a better user experience for the visitors.
Analytics
Analytical cookies are used to understand how visitors interact with the website. These cookies help provide information on metrics the number of visitors, bounce rate, traffic source, etc.
Advertisement
Advertisement cookies are used to provide visitors with relevant ads and marketing campaigns. These cookies track visitors across websites and collect information to provide customized ads.
Others
Other uncategorized cookies are those that are being analyzed and have not been classified into a category as yet.
SAVE & ACCEPT
30 Shares
Share
Pin30
Tweet
WhatsApp
Reddit
Share
Email
More